Contemporary libraries are offering patrons more than information and recreational resources by extending their services to include cultural resources (Gross, 2013). This concept is designed to connect with and engage patrons in cultural activities that have previously been outside the library domain. It is designed to bring people together to open discussions that deliver education and learning opportunities through a different medium.

Whether it is a series of regular exhibits as in Samuel J. Wood Library,   or an art installation like Black Opium, or a collection of photographs from a local history group – the concept of pop culture within libraries extends the outreach to a more diverse community. Communication with the creators of thèse works is key to understanding more about community, with many libraries running a program for artists in résidence.

Steampunk enthusiasts revel in the Victorian era, Science Fiction and the remodelling and re-inventing of 19th Century engineering artefacts. The convention platform provided a venue for hobbyists, tinkerers and professional artists to enjoy a creative experience. Table Top Gaming included Dungeons and Dragons. It’s a great example of a community project that stimulates conversation and engagement.

As creative spaces within libraries is a relatively new concept for State Library of Queensland, to date there is little evidence-based knowledge of the impact of the program. However, the educational outcomes from these programs might be raising cultural awareness, exploring the history of the culture and in developing understanding and tolerance for diversity and the joy of recreational and interactive learning within a community space.  The possibilities are endless.

Twitter chats are short and sweet with a ton of content that is sometimes very hard to digest. This dynamic and challenging medium of communication demands preparation, concentration and the ability to be seriously succinct.

The introduction of  makerspaces to library environments is evolving so quickly and so diversely with so many platforms for exploration available that connecting makerspaces with the succinctness of twitter chat is in itself quite an oxymoron.

Rigorous discussion of reasons to establish or not establish a makerspace in libraries iterated the common theme of meeting user wants and needs within the community. Nura Firdawsi, Karen Parker, Kylie Burgess, Michele Smith and Katie Ferguson responded to Heidi Stevens’ early tweet questioning the notion of ‘trend based purchases seen out of scope’.

Competing arenas of STEM and GLAM also featured in discussions as to why libraries should provide spaces for these activities when previously community interest groups had filled this need. The discussion led to sharing experiences of learning within dedicated communities, where inexperienced people felt uncomfortable in that environment. Library programs are seen to provide a more encouraging and nurturing platform of learning supporting creativity and experiential learning.

The Edge – a masterpiece makerspace – styled by State Library of Queensland

The Edge is described as ‘a visionary space for ‘creating creatives’; a melting pot of ideas and innovation, capacity-building, experimentation and innovation’. The space provides a meeting place for creators to create and share ideas, using the space, tools, equipment and support network provided under the mandate of ‘empowering Queenslanders to explore creativity across art science technology and enterprise’.

This aligns with [Lisa Hetherington’s] belief that libraries are a place to explore and learn and [Katie Ferguson’s] belief in meeting community needs and interests. It’s about accessing technology to enhance learning by bridging the technology gap that exists even in the middle of the city.

Events courses and programs described in the Edge E-News publication invite public participation in creative workshops and short courses; meet-ups to learn about calligraphy, book crafts, interactive technology, design and multimedia production; and an invitation to look at The Edge and all it has to offer.

Makerspaces are more than a haven for creativity – they’re about incubating new ideas – supporting creators with tools and equipment – building a platform for startups – giving innovators a place to design and prototype. Makerspaces empower people to have a go, without fear of failure, in a non-confronting space, with support, encouragement, tools and knowledge.  Makerspaces foster community engagement and peer-to-peer interactions that open conversations and share knowledge through the iterative processes of creativity.

I listened to Chris Lau, general manager of Portland Oregon’s entrepreneurial makerspace Art Design “ADX” Portland, when he presented a forum hosted by The Edge, SLQ in May 2016.  This business has increased by an average of 61% annually over the past three years, due to what he describes as  American Makers of the Manufacturing Renaissance.  Essentially ADX is a warehouse space that provides small businesses with an opportunity to collaborate and share knowledge in their pursuit of a place in the market and product development.

The [Manufacturing] Renaissance is emerging where local economies become self-reliant and more robust.  Chris Lau proposed that ‘the politics of humanity eclipse the politics of globalisation’ – a great foundation statement for the maker movement where people are encouraged to work together, and work on what is available locally, coordinating these resources to work collectively to access the expertise within the ADX community.

Chris Lau spoke about the huge potential for partnerships between maker spaces and libraries especially where maker spaces are introduced into libraries to re-invigorate sharing spaces. While ADX  is a business model for social enterprise, makerspaces in public libraries create a plethora of opportunities for community engagement and connection among creators.  The focus for this informal and experiential learning is on upskilling rather than accreditation.

Following this presentation, I toured the makerspace in the basement of The Edge, where an eclectic team whose skill levels are diverse,  offer support and services to makers. The Edge team shares a common commitment to supporting and encouraging ‘makers’ in a safe and secure environment, using a  professional standard of equipment that is properly maintained.

Libraries are evolving continually to accommodate the demands of  disruptive technology that sweeps away tradition paving the way for innovation and design.  Providing a makerspace is more than providing a 3D printer – it’s more about discovering what the 3D printer can do and why the library chooses to have it.  It is not about having the shiny new thing but about having the thing that is most needed and will be most used. 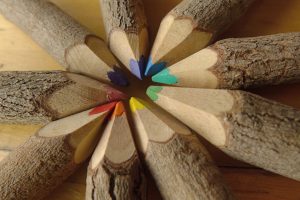 This is so within  a community of learning, for if we simply read and absorb the information presented by another, then that answers just that one query at that one time; but if we read the answer, then de-construct and analyse that information, investigate it further and add another facet then the answer creates a broader perspective and deeper understanding.

The concept of community of inquiry opens discussion, inviting analysis and investigation to improve understanding and increase knowledge.  Creating a culture of critical analysis offers opportunity to experiment and to think laterally to really make a difference.

We’re continually exposed to these opportunities through informal forums like think tanks and brain storming, and formal processes like investigation and research and analysis.   When I am in a Community of Inquity, I tend to try to fly under the radar, only venturing a strong opinion when I’m sure of supporting evidence.

This aligns with my ‘ideal’ personal profile of contributing to the online discussion with factual information that is in context with the discussion.  This doesn’t always work of course, but it is my ‘ideal’ profile.  I like to think that I am responsible and responsive to queries and genuinely seek information to share either online or offline.  I am respectful and courteous, non-discriminatory and compassionate with a commitment to practically and proactively supporting those within the community.

Having completed my first week of fieldwork placement at Helensvale Library this week my perspective of the services provided by public libraries was informed by the diverse programs and products run by the library.  The team of librarians, library technicians, library assistants, IT specialists and community organisations work together at Helensvale to provide the public with the information and services they need.  Community programs provided young families with an introduction to rhyme and literature through regular morning meetings with singing, dancing and a bubble machine.  School-age children were invited to undertake STEM experiments working individually and in teams to discover simple scientific and engineering concepts through craft-type play activities.  Older children were encouraged to experiment with Minecraft, Scratch and Digiworks programs run by librarians and other tech-savvy team members.  Adolescent and adult patrons were offered assistance in access to the internet, use of computers, operation of the printer/copier/scanner and basic access to resources including DVDs, music scores, CDs, audio books, books and magazines.

The library team was cohesive and collaborative in its delivery of information and literacy services, respecting the diverse levels of ability of its patrons and taking care to understand their needs and respond to their queries.  This kind of collaborative culture has been developed through an environment where experimentation and exploration is encouraged throughout the team.  It has evolved from observation and survey of users to asssess their needs and to meet their expecations.

Technology has changed the nature of library ‘business’.  Self check-out and check-in is accepted by an estimated 96% of the branch patrons, with patrons encouraged to manage their individual accounts online using their library membership card to access the catalogue, information about loans, holds and upcoming events at the library.

Access to computers, printing, copying and scanning services, together with free wi-fi access has brought a different vibe to the library with many arriving at the library at 9am with their laptops, phones and briefcases as if the library is their office.  Visitors to the area use library services to access free wifi to check emails.  New residents join the library so that they can use the products and services and become involved in programs of learning.   It’s a vibrant community of people who work together to engage in self-education, self-improvement, recreational learning and reading and discovery of new and not so new technology.

This sharing of knowledge and information and making available the tools and facilities needed to support self-education supports many within the community who may not otherwise have access to formal learning.  It also provides an open forum for sharing of knowledge, information and skills.   While Helensvale library does not currently have a formal Makerspace, programs and events provide activities that fit within the regulatory frameworks of health and safety.

As Liz McGettigan stated we need to ensure that the 21st Century library will continue to engage with community in the format and with the content that the users desire.

Error: You are not connected to Twitter.
Skip to toolbar